"The first prototypes of a high-tech suit of armor to give soldiers superhuman abilities could be ready to test this summer, according to top military officials. The suits, which have drawn comparisons to the one worn by Marvel Comics superhero "Iron Man," could be delivered to special operations forces as early as June.

The Tactical Assault Light Operator Suit, or TALOS, is being developed by engineers at MIT; the U.S. Army Research, Development and Engineering Command (RDECOM); and researchers at other businesses and academic institutions. Prototypes of the suit, which is designed to provide protection from bullets and is equipped with a variety of sensors and cameras, are being assembled and could be ready for the military to test in June, reported Military.com.

The TALOS technology will be rigorously tested, and military personnel hope to have operational systems in the field by August 2018, according to Navy Adm. William McRaven, head of the U.S. Special Operations Command. [See video of the military's futuristic TALOS suit]

"That suit, if done correctly, will yield a revolutionary improvement in survivability and capability for special operators," McRaven said at the 25th annual Special Operations and Low-Intensity Conflict conference this week in Washington, D.C., according to Military.com.

The suit includes features such as 360-degree cameras with built-in night vision capabilities, sensors that can detect injuries and apply wound-sealing foam, and bulletproof armor.

Eventually, the TALOS systems may include full-body exoskeletons complete with screens that display information about a soldier's surroundings, according to Military.com. 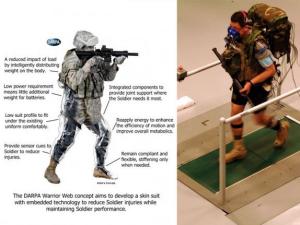 The technology could give American soldiers a "huge comparative advantage over our enemies and give our warriors the protection they need," McRaven said.

Government agencies, corporations, universities and national laboratories are collaborating on the TALOS project, and the military may explore ways to distribute prize money as an incentive for others to get involved in the program, McRaven said.

"We are already seeing astounding results of this collaboration," he added.

The TALOS project began as a way to explore how technology can be used to protect special operations officers better in combat zones. "With all the advances in modern technology, I know we can do better," McRaven said.

Copyright 2014 LiveScience, a TechMediaNetwork company. All rights reserved. This material may not be published, broadcast, rewritten or redistributed."

Having a camera for live streaming installed would be appropriate for the gear.